Get me outta here!

Anantara Phuket Villas Resort takes a pride in the Thai heritage and hospitality. Once you step out of your

Drawing inspiration from a Thai village, Anantara Phuket Villas encompasses 83 villas varying from Sala Pool Villa, through the Lagoon Pool Villa to the Pool Villa. The difference is probably the space and view – other than that you get equal treat and attention from Anantara.

The Pool Villa is designed in the style of a traditional Thai house with privacy ensured by a tall wooden fence. Climb up a few steps, walk through the wooden entrance, and you stand on the wooden deck, leading to your villa and small “sala” pavilion.

Food is available at the resort’s two restaurants. La Sala is open all day and is where guests enjoy the generous buffet breakfast and dinner. Sea.Fire.Salt is Anantara’s signature beachfront restaurant and offers BBQ and seafood specialities.

Anantara Phuket Villas is ideal for a peaceful escape. I thoroughly enjoy waking early in the morning, working out on the yoga mat then following the small path through the tropical garden listening to Mother Nature.

Tassapon Bijleveld, CEO of Thai AirAsia, said that AirAsia’s determination to make its services more convenient and responsive to the demands of its travellers led to the creation of Thailand’s Easy Island Transfers, which allows for easy travel to southern Thailand’s most popular islands. The idea is to offer a one-stop shop service for travelers who are looking for a simple, economical and convenient way to access Thailand’s southern islands.

“We noticed that most travellers to the southern provinces of Phuket, Surat Thani, Krabi, Nakhon Si Thammarat and Hat Yai – Songkhla continue on to either Samui, Phangan, Phi Phi, Lanta or Lipe Island, so it made sense for us to offer transfers to the islands alongside our ticketing service in order to give travelers that added convenience when planning their trips,” said the CEO.

Thailand’s Easy Island Transfer service begins by letting customers choose one of the 5 island destinations of Samui, Phangan, Phi Phi, Lanta or Lipe Island. The booking system will then automatically select the nearest airstrip to the island. Upon arrival to the airport, a passenger vehicle will collect them and transport them to the appropriate pier so they may embark on a ferry ride to their chosen island. AirAsia has joined forces with the most trusted local service providers to assure that this service is as enjoyable as it is economical. 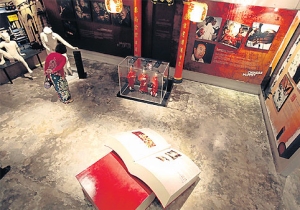 Mention Phuket and you immediately think of its beaches. But, surely, Phuket has other points of interest even if they don’t come to mind as readily. One of them is exploring its history, and for that there’s no better place than the Phuket Thai Hua Museum located in the old quarter of town.

“Our museum completed a major 16 million baht renovation in 2010, undertaken with the aim of making it a model museum representative of the entire southern region of Thailand,” said Kantiya Muttarak, an accountant there who doubles as a guide.

In the first four years of its opening, all the museum had to show visitors was historical pictures of the old town area, but with the renovation it is now able to provide an interactive service where you can touch or play with subjects on exhibit. Thanks to technical support from the National Discovery Museum Institute which manages Museum Siam in Bangkok, the Phuket outlet has in place a play and-learn mechanism to attract visitors.

Comprising 13 exhibition rooms, the museum sits in a two-storey Sino-Portuguese building that used to be the first Chinese-language school in Phuket. The building is also one of the most beautiful in town, and in 2008 it received a citation from the Association of Siamese Architects for outstanding conservation of architectural arts.

Stepping inside the reception hall, you see a piano installed in the memory of Sunpin Sae Sueng (1914-2004), headmaster of the Chinese-language school, to whom an entire room is dedicated, for his tireless service. Then you pass a small inner courtyard in the middle of the museum, a feature typical of Sino-Portuguese buildings in Phuket, the open space created to facilitate ventilation, said the guide.

To explore the museum by its history, visitors are advised to start at a room marked Chinese Migration on the second floor and from there proceed clockwise to other rooms, before moving down and continuing the tour of rooms on the first floor.

The Chinese Migration room is one of the most popular, especially among children, perhaps because visitors can play games and visualise themselves as early Chinese immigrants sailing in wooden boats to Phuket, said the guide. A multimedia presentation shows the routes the immigrants took to reach Phuket, most of them drawn there by the boom in Phuket‘s industry around the reign of King Rama III.

The next room shows the beginning of Chinese influence taking hold in Phuket, including one of the most well-known tycoons of his time, Tannniawyee, who was bestowed with the title Luang Bamrungjeenprathet and held the position of district chief. His son Phraya Ratsadanupradit was appointed commissioner of Phuket and he built a small hall, the first Chinese-language school, opening in 1917 under the name Phuket Huabun School. It subsequently expanded and in 1948 was renamed Phuket Thai Hua School.

Another interesting stop is a room labelled The Chinese of Phuket which is a showcase of the Chinese way of life on the island, their intellect, and the works and biographies of three influential Chinese artists _ all accomplished sculptors, puppet masters, and prominent scribes.

All information at the museum is available in both Thai and English, while some multimedia presentations are presented in Chinese.

Overall, the museum is doing a good job explaining the history of Phuket, which it does from early Rattanakosin period to the present day, from different angles such as the way of life, business, traditional ceremonies, local costume, food and eating habits.

It just takes about two hours to admire Phuket from a very different perspective.